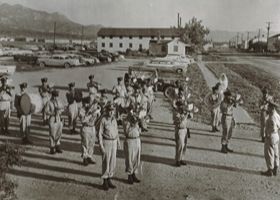 The 101st Army Band was organized and federally recognized 18 September 1937 in the Colorado National Guard as the Band Section of Service Battery of the 168th Field Artillery in Denver , Colorado . It was separated from the Service Battery 1 July 1940 and reorganized as the Band, 168 Field Artillery. The Band was inducted into Federal service 24 February 1941 . During this time period, the Band was moved to a temporary change of station at Camp Roberts , California . It was again reorganized and re-designated on 6 March 1943 as the Band, Sixth Replacement Depot, and prepared for deployment in the South Pacific Theater. The Unit arrived for duty in New Caledonia on 16 May 1943 aboard the ship Tjisadone. In March 1944, the Band was re-designated twice, first as the 396th Army Band, then as the 396th Army Band Service Forces Band. Relieved of its post 15 August 1944 , the Band was transferred to Manila , Philippine Islands. It was deactivated from its Philippine post 5 April 1946 . On 10 May 1946 , this unit was finally re-designated as the 101st Army Band and federally recognized on 24 February 1947 , once again, in Denver.

The 101st participated in Veterans Day ceremonies in 1989 in the U.S. Virgin Islands, helping to relieve the trauma of Hurricane Hugo just two months after that storm devastated the islands of St. Thomas and St. Croix . In 1991, the 101st Army Band welcomed home every returning Colorado National Guard veteran of the war in the Persian Gulf . The Band then toured Cortez , Durango , Monte Vista, Las Animas, and Lamar Colorado to celebrate the safe return of Colorado ‘s Desert Storm Veterans. In 1992, the 101st traveled to the Dominican Republic . On a 10-day tour, it entertained in the capital city of Santo Domingo and outlying communities. The Band also entertained in Nicaragua in 1993 for its annual training tour. It performed concerts in several Nicaraguan cities, including the capital city of Managua , where it was featured in the annual Fourth-of-July ceremonies. The 101st Army Band has performed at such functions as the 1991 and 1994 International Highlands Festivals, the 1991 Stars and Stripes Salute parade in Dallas , and the 1993 and 1997 Colorado Music Educators Association conventions. 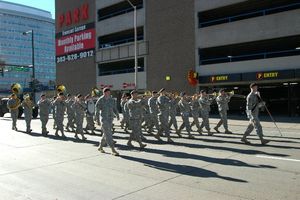 Into the 21st Century…

The 101st Army Band, a unit of the Colorado Army National Guard that is now in its 80th year, consists of 35 citizen-soldiers whose occupations range from student to teacher and computer programmer to waiter. The Band members attend from as far away as Montrose and Greeley, Colorado to train intensively every month in Aurora. The mission of the 101st is to provide ceremonial music and musical entertainment on behalf of the State of Colorado and the United States Army. Colorado’s only Army band, the 101st features a variety of patriotic, jazz, popular, country, classical, rock, and dixieland music, performed by seven different ensembles.

Parades, formal public concerts, school assemblies, clinics, music festivals, and television appearances are all part of the 101st Army Band’s schedule. Under the command of CW3 Russ Massey, the 101st Army Band presents its programs year-round to communities throughout Colorado and occasionally outside of the state. It has also performed with such groups as the Rocky Mountain Brassworks, the Metropolitan State College of Denver Wind Ensemble, the Adams State College Wind Ensemble, the 3rd U.S. Infantry Fife and Drum Corps (“The Old Guard”), The U.S. Army Band (“Pershing’s Own”), and the U.S. Marine Drum and Bugle Corps. The Band’s Dixieland ensemble has been a feature performer in the annual Memorial Day salute to Veterans at the Sacramento Jazz Jubilee since 2000.

Whether performing in the United States or representing our country as musical ambassadors overseas, the 101st Army Band entertains audiences of all ages and backgrounds with an exciting and diverse musical presentation.